Check out our special promotions!

Originally from Chicago, Head Instructor Joshua Margalus began his martial arts training at the age of only 8 years old and earned his black belt in taekwondo at 16. Josh credits martial arts with helping him move past poor body image issues and learning self-respect. More than just a teacher, Josh considers himself a mentor and strives to be a resource for both his students and their families. He believes that confidence and respect are some of the greatest teachings karate imparts and often says “the only opponent you have in life is yourself!”

A perpetual student of life, Josh is always teaching himself new skills and is currently learning to play the piano and studying computer coding and 3d animation. Joshua has his 2nd Dan (2nd degree black belt) and has competed in tournaments, placing in both Forms and Sparring in 2005-2006. In addition to his PMA family, Joshua is married, has four cats and a pit bull! 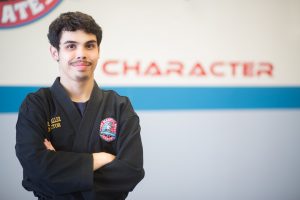 Odin has been practicing Martial Arts since he was 5. He is passionate about helping people of all ages to empower themselves with martial arts, confidence and character building. He continues to train everyday and believes that martial arts is not only a skill but a lifestyle.

As a military kid, Wendy Napolitano has lived all over the world! As a young child living in the Philippines, Wendy started taking karate classes and has continued to study every since. Today, Wendy is a Dan, or first degree black belt, and has competed extensively, taking 2nd and 3rd place in Kata (forms), 4th place in Kihon (basics) and 2nd place in Kumite (sparring). 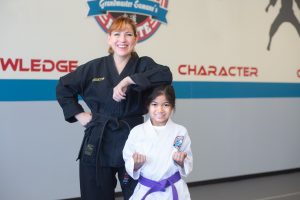 Wendy believes in working with every student where they are and helping them improve. Her favorite saying is “every black belt begins as a while belt!” When Wendy is not at the dojo, she can be found spending time with her husband of nearly 30 years and two adult children. Wendy’s varied interests include quilting and golf.

As a precautionary health measure for our Pro Martial Arts members, in light of COVID-19, some support and training options may be unavailable or delayed. We apologize for any inconvenience this may cause and appreciate your patience. This message will be updated as the situation changes.